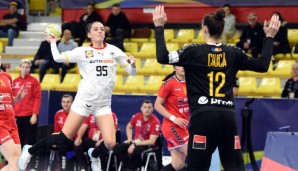 Again no medal, but a lot of catching up to do: Germany’s handball players are lagging behind the international competition – a small hope was dashed. The live ticker to read.

The dream of the long-awaited medal has burst, the need to catch up is immense, and even the last small hope was dashed: Germany’s handball players are lagging behind the international competition, after the early failure at the European Championships, the team of national coach Markus Gaugisch also missed the game for fifth place .

The selection of the German Handball Federation (DHB) prevailed on Wednesday in the last main round game with 32:28 (16:14) against Romania. Johanna Stockschläder was the best thrower with ten goals. In order to qualify as third in the group for the placement game, support was needed, but that didn’t happen because the Netherlands won 42:25 (21:15) against Montenegro in the evening.

“We beat the Netherlands and Romania and lost to the top favorites. We can be absolutely satisfied with the main round,” said Gaugisch. With a view to participating in a qualifying tournament for the Olympic Games, fifth place could have been important, but nothing came of it.

“You can still see a difference in terms of the speed of action and dynamics. We still need a bit there,” Gaugisch had analyzed after the 21:29 (9:13) against Olympic champion France on Tuesday, which relentlessly analyzed the weaknesses of the DHB selection disclosed. The German team made numerous simple mistakes. Too many to compete with the top teams.

Handball World Cup: DHB team with too much mortgage in the main round

Quite a few may have wished for a larger development step after the commitment of hopeful Gaugisch. Even after the disastrous preliminary round, from which Germany took a mortgage of 0:4 points in the main round, the DHB team had only minimal chances of progressing.

The stated goal of the national coach is the Olympics anyway. In mid-April, Gaugisch had signed a contract until 2024, should the qualification for Paris succeed, this would be automatically extended by two more years – and then also include the home World Cup in winter 2025. But there is hardly any time, the DHB has some catching up to do.

“We need a lot more experience,” said sporting director Axel Kromer. This comes “of course also through quality”. Quality that the German team can hardly show at the moment. “We played against the Olympic champions and were shown that we don’t belong in the semi-finals yet,” said Kromer: “But we want to get there.”

“We all have the dream of winning a medal one day,” said backcourt player Xenia Smits. “The goal of knocking on the door at the top is still a bit too far away for us”. Since bronze at the 2007 World Cup, Germany has been waiting for a medal at a major tournament.

It seems as if Smits and Co. have to be patient.

Women’s Handball Championship: Germany vs. Romania Now in the live ticker – end of the game

58th: Alina Grijseels prevails in the middle and scores 32:28. That should have been the win.

56th: Emily Bölk scores from the backcourt – 31:27. The Romanians seem a bit flat in the closing stages.

51st: There are still ten minutes to play. Germany should keep the four-goal lead.

47th: Ninth goal by Johanna Stockschläder – 27:22. Then there are two minutes for Germany and seven meters for Romania, which substitute Katharina Filter saves.

46th: A quick pass from Emily Bölk to Grijseels, who goes one better. Time out Romania.

41st: Nice allusion to the circle of Maren Schmelzer, who turns ice cold.

40th: Both teams make mistakes in attack. Luckily, Germany can rely on the strong Grijseels, who increased the penalty to 21:18.

35th: Next seven meters for Germany. And again Grijseels keeps his nerve – 18:16. Backcourt player Emily Bölk follows the next attack.

33rd: Isabell Roch has shown a strong performance so far and holds against Grozav, who was alone.

31: Germany with the first goal in the second half. Stockschläder scores from the outside left.

31st: Let’s continue with the second 30 minutes. Can Germany defend the lead?

Women’s Handball Championship: Germany vs. Romania Now in the live ticker – beginning of the 2nd half

Women’s Handball Championship: Germany vs. Romania Now in the live ticker – half time

30th: Germany is more than six minutes without a goal. Romania uses this to 14:16.

28th: Lucky for Germany! A Romanian throw hits the post. Nothing is going well in attack at the moment – and then there are still two minutes for Germany.

22nd: Julia Maidhof hits the empty goal of the Romanians. Now the DHB women are three goals ahead again.

20th: A good phase for the Romanians. Grozav scores at 11:12. The German attack falters a bit in the last few minutes.

19th: Bad luck for Grijseels, whose shot hits the crossbar. In return, Romania shortened to 9:11.

15th: Seven meters for Germany and two minutes for Romania. Grijseels transformed again for sure.

14th: Fifth goal for Germany in a row by Emily Bölk to make it 8:6 – and Stockschläger follows up after a counterattack.

12th: Isabell Roch is now in the German goal for Filter – and holds two balls at the same time.

11th: And Johanna Stockschläder follows up – that’s the equalizer.

10th: Emily Bölk hits with violence from a distance. Romania is only one goal ahead.

8th.: Now every throw is a hit Johanna Stockschläder shortened to 4:6.

7th: It’s far too easy for Romania. Neagu rises up and makes it 5:2 for Romania. Goalkeeper Katharina Filter has hardly saved a ball so far.

5th: The spell is broken! Emily Bölk with the first goal for Germany. Hopefully we won’t have to wait so long for the next goal again.

3rd: Germany is still waiting for the first goal. Pristavita, on the other hand, scores for Romania for the third time.

1.: The first attack fizzles out. Forward foul by Julia Maidhof.

Women’s Handball Championship: Germany vs. Romania Now in the live ticker – start of the game

Before start: The game will start soon. The national anthems are being played.

Before start: The German handball players can no longer reach the semi-finals after the defeat against France. This also applies to Romania. However, for both of them it is still a matter of placing behind France and Montenegro in Group II, which are important for participation in the Olympic Games.

Before start: The game starts at 3.30 p.m. in the Sportski centar Boris Trajkovski in the North Macedonian capital of Skopje.

Before start: Hello and welcome to the live ticker of the game at the women’s handball championship between Germany and Romania.

The transmission with Tobias Simon and Ina Großmann begins at 3 p.m.

Women’s handball championship: Table of the main round group II at a glance