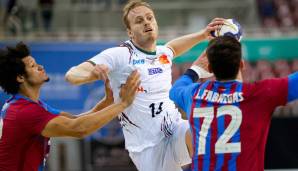 The German champions SC Magdeburg successfully defended their title at the Club World Cup in a real handball thriller. As in the previous year, the Bundesliga team defeated the Champions League winner FC Barcelona in the final, in the Saudi Arabian Dammam it was 41:39 (35:35, 21:17) after extra time for Magdeburg. The traditional club won the fifth German title at the IHF Super Globe.

Lukas Mertens gave Magdeburg the lead 40 seconds before the regular end with one of his six goals, but five seconds before the siren the Spaniards equalized with a seven-metre throw. In the extra time, the people from the Elbe town still managed to win, again driven by Omar Ingi Magnusson. The Icelander was again the best thrower for Magdeburg with twelve goals.

The Club World Cup, which was held for the first time in 1997, was won by THW Kiel (2011) and Füchse Berlin (2015/2016) before Magdeburg from Germany. The title went to Spain nine times, including five times to record champion Barcelona alone. Al Sadd from Qatar (2002) was the only team outside of Germany or Spain to triumph – back then in a everyone-against-everyone system in front of Magdeburg.

This year, the German champions met underdogs Sydney University HC (41:23) and Khaleej Club Saihat from Saudi Arabia (35:29) in the group phase. In the semi-finals they managed to win against Al-Ahly (36:28). At the event in Saudi Arabia, all games without Saudi or Egyptian participation were only followed by a few hundred spectators, but the final attracted 3,120 visitors.