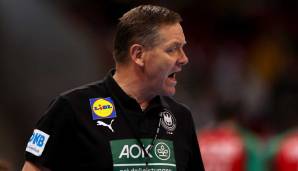 The German national handball team meets the reigning European champion Sweden today at the start of the EHF Euro Cup. You can follow the game in the live ticker here.

In preparation for the European Handball Championship 2024 in Germany, the DHB team is taking part in the EHF Euro Cup 2024. At the start today it’s against the reigning European champions Sweden. at SPOX the encounter can be followed in the live ticker.

This article will be continuously updated. Click here to refresh the page.

Handball – Germany vs. Sweden: EHF Euro Cup today in the live ticker – before the start

Before start: Shortly before the start, the German handball players have to record another failure. Backcourt player Lukas Stutzke (24) from Bundesliga club Bergischer HC suffered a minor thigh injury and will be out of the game against the European champions on Thursday and the game in Spain on Saturday. National coach Alfred Gislason nominated Simon Ernst from DHfK Leipzig, but the 2016 European champion will not join the team until Friday. Stutzke is the third failure during the current international match measure. Circle runner Jannik Kohlbacher (Rhein-Neckar Löwen) had canceled his cancellation due to illness, left-hander Fabian Wiede (Füchse Berlin) twisted his ankle in training on Monday and had to leave.

Before start: The game will be played at 7 p.m. in Mannheim’s SAP Arena.

Before start: Hello and welcome to the handball game at the EHF Euro Cup between Germany and Sweden.

The start of the EHF Euro Cup will be broadcast live and in full on free TV today sports1 shown. Transmission and preliminary reporting will start there at 6:45 p.m. During the game, Peter Kohl will be used by the private broadcaster as a commentator. The game can also be seen in the free live stream, again sports1 the right contact person.