Gislason on Pekeler’s return: “I have hope” 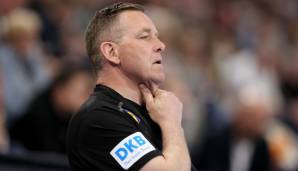 National coach Alfred Gislason expects circle player Hendrik Pekeler to return to the national handball team – but not before the World Cup in Poland and Sweden (January 11 to 29, 2023). “The development of our defenders is pleasing, but I still have hope that Pekeler will come back,” said the Icelander Frankfurter Allgemeine Zeitung.

The defense chief of THW Kiel is currently absent due to a torn Achilles tendon. After the disappointing German performance at the 2021 Olympics in Tokyo, the 31-year-old also announced a “long break” in the selection of the German Handball Association (DHB).

“Now, as far as I know, he’s pain-free with his Achilles tendon for the first time in years. And there’s hope that he’ll get so fit that he’ll say: I want to go back,” said Gislason: “We stayed like that for now I’ll leave him alone and then we’ll see what happens next year. He’s not so old that his career should be over. If he were Spanish he would have ten years left themselves. But the Spaniards don’t play in the Bundesliga either.”

The lack of time off and the associated compatibility of family and work are “the difficult thing” for players from the Handball Bundesliga (HBL),” said Gislason: “It’s not necessarily the many games, but not having a break for the family. That is the problem for all the family fathers who have been playing in the Bundesliga for 12 or 14 years.” With other nations you can see “that there are often whole families at the tournaments. That’s not a bad thought,” explained the 63-year-old.

In the coming international matches against Sweden and in Spain, the DHB team also has to defeat Fabian Wiede. The left-hander from Füchsen Berlin injured his right foot on Monday. For Gislason, it is the second absence in the current international match after the sick pivot Jannik Kohlbacher (Rhein-Neckar Löwen).

Backcourt player Franz Semper from SG Flensburg-Handewitt has joined the DHB squad for Wiede. The left-hander, who was part of the 2019 World Cup squad, is returning to the DHB team after a long break due to heart muscle inflammation and a cruciate ligament rupture.

The German national team, which started its course on Monday in Frankfurt/Main, meets European champions Sweden in the EHF EURO Cup on Thursday (7 p.m.) in Mannheim and two days later on Saturday (8.15 p.m.) in Jaen hosts Spain. The last two international matches of the year are part of the preparation for the 2023 World Cup from 11 to 29 January 2023 in Poland and Sweden.