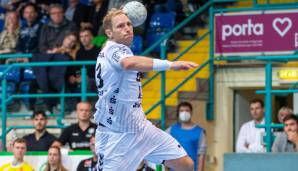 Defending champions SC Magdeburg and record champions THW Kiel have kept their clean sheets in the Bundesliga after their successful debut in the Champions League. Champion Magdeburg celebrated their fourth success in the fourth game of the season at Frisch Auf Göppingen with 31:26 (15:14), as did Kiel with the sovereign 34:18 (17:9) victory at the still pointless basement child TSV GWD Minden.

Kiel is in the table at the top of a quartet that got off to the best possible start, which, alongside Magdeburg, is completed by Rhein-Neckar Löwen and HC Erlangen (all 8-0 points).

Magdeburg celebrated its successful return to the premier class last Thursday at Dinamo Bucharest (30:28), the title holder from 2002 had been missing from Europe’s top clubs for 16 years. In everyday league life, the guests in Göppingen initially struggled, but pulled away from 3,600 spectators after the break by up to eight goals.

The top scorer of the game was Göppingen’s Marcel Schiller with seven goals, followed by Magdeburg’s Daniel Pettersson and Omar Ingi Magnusson (6 each). The SCM is worried about Icelander Gisli Kristjansson, who left the field shortly before the end after a collision with knee pain.

Four days after the 36:26 victory in the European premier class against the Norwegian representative Elverum Handball, Kiel got rid of the task in Minden without much effort. The Swede Karl Wallinius was the most successful thrower for the guests with five goals, for which three other players scored four times. Minden’s most accurate player was the Spaniard Carles Asensio with four goals.

The Rhein-Neckar Löwen and the surprise team from Erlangen each celebrated their fourth win in four games on Saturday. Die Löwen won 43:30 at TVB Stuttgart, Erlangen won 32:29 at newly promoted ASV Hamm-Westfalen. SG Flensburg-Handewitt and Füchse Berlin fell out of the narrowest group of leaders after losing their first point at 31:31 last Thursday in a direct duel.

Previous VfL Bochum – 1. FC Köln 1: 1: Even after Reis-Aus after no win for VfL
Next TSG Hoffenheim vs. SC Freiburg: Bundesliga NOW in the live ticker

A win at the start, followed by a surprising defeat in Slovenia – the CL …