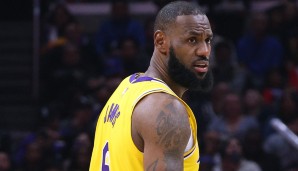 LeBron James was injured again in the last quarter of the Los Angeles Lakers game against the LA Clippers. It is not yet clear if the 37-year-old will be absent for long.

Midway through the fourth quarter, James limped off the field, clutching his groin in the process. The Lakers did not give much more information, reporting that LeBron would feel pain in his left leg.

James himself said after the game that he was undergoing treatment and was hopeful he could get back on the field against the Sacramento Kings on Friday. It’s not the first time James has had groin problems. In his first season with the Lakers, the four-time MVP injured his groin in a game against the Golden State Warriors and missed more than a month and 17 games.

James took that scenario off the table, saying he didn’t feel as bad as that Christmas game four years ago. Most recently, LeBron had stopped with a sore foot in the loss at Utah, but he was looking forward to being a part of the city’s duel with the Clippers.

However, it didn’t help. The Clippers easily won 114-101, despite LeBron playing one of his best games of the season. James registered 30 points (12/22 FG), 8 rebounds, 5 assists and 2 steals in 32 minutes. With a 2-9 record, the Lakers remain second from last in the Western Conference.