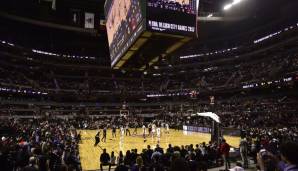 On Sunday, a G-League game was played for the first time in Mexico City. As confirmed by an NBA representative, Mexico City is on the list of cities to consider for possible expansion.

“Expansion is not on our agenda right now, but when we get to that point where that becomes an issue, we will also consider the Mexico City option,” NBA deputy commissioner Mark Tatum said. to Marc J. Spears. andscape.

On Sunday, the Mexico City Capitanes played a G-League game at home for the first time after the team played its games in Fort Worth, Texas last year due to the corona pandemic and travel restrictions. corresponding.

According to Tatum, the facilities are already at the level of the NBA, and the safety of the players is also taken care of. However, there is still a long way to go before Mexico City can be considered. The NBA last expanded 18 years ago with the formation of the Charlotte Bobcats.

However, according to Spears, Seattle is still supposed to initially be awarded the contract in the event of an expansion. Las Vegas is also considered a hot candidate, especially since LeBron James announced in the preseason that he wanted to become one of the owners of a possible franchise in Sin City.

LeBron James injured in the Lakers’ loss to the LA Clippers