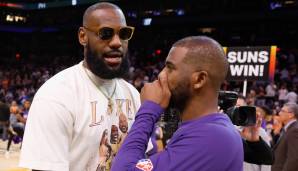 Finally, the new NBA season is upon us! But before things get rolling again in the best basketball league in the world, we want to hear your advice: who will be the big surprise of the season? And who will be the biggest disappointment?

On the night of Tuesday to Wednesday it is finally that time again, at 1:30 German time the new NBA season starts with the duel Celtics vs Sixers. Immediately after, at 4 am, the Golden State Warriors begin their title defense mission against LeBron James and the Lakers. You can watch both games live on DAZN!

Before we get started though, it’s time for some predictions. NBA editor Ole Frerks has already laid out ten bold theses for the new season in his column, now it’s your turn.

Who will be the big (positive) surprise of the next season? On the other hand, which team from the Eastern and Western Conferences do you think will disappoint? Vote now – app users please this way!

LeBron James injured in the Lakers’ loss to the LA Clippers